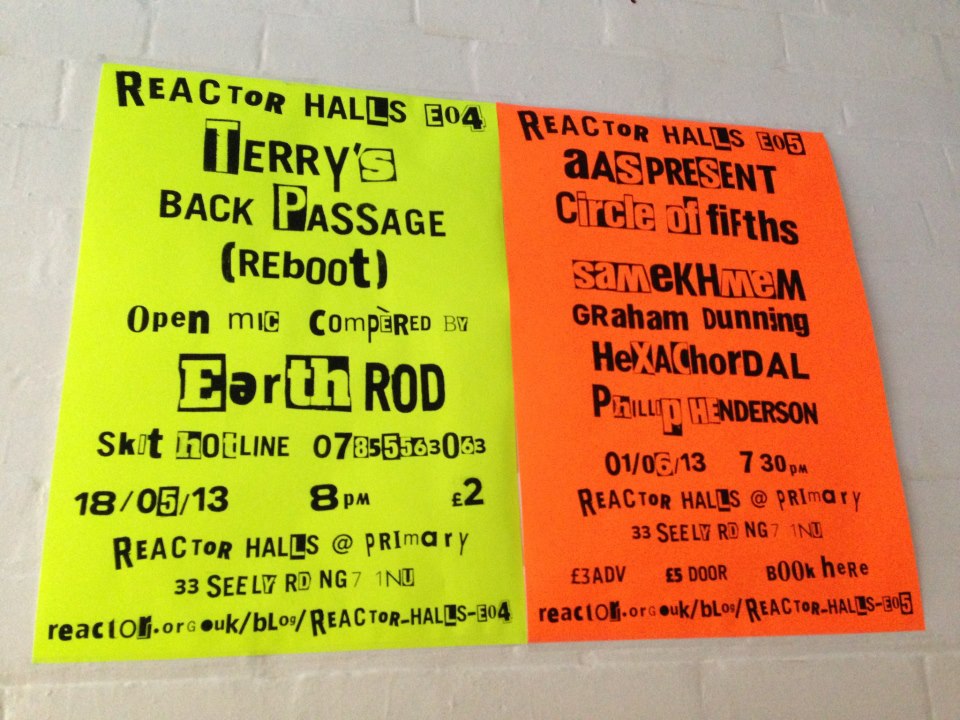 On 1st June I’ll be performing a solo drone and bass set for Reactor Halls in Nottingham, curated by aas art group. Full details below.

Also on the bill are Samekhmem, Hexachordal and Phillip Henderson. We will each play separate sets, overlapping, and combine at various points in the performance.

Samkhmem are performers of the Sacred Eternal Drone – a perpetual vibration that has always been and will always continue. Samekhmem offer a meditative environment for the audience’s inner journey, before words, before music. Samekhmem performances exist in flux between eternal duration and linear time. Samekhmem’s recordings are distributed via Trojan Goat Records.
http://samekhmem.bandcamp.com/
http://aasgroup.net/trojangoat/

Graham Dunning is an artist and musician based in London. In his current live set he uses sound from forced locked-groove records, looped found tapes, live environmental sound, walkmans and analogue synth to create a dark, bass-heavy collage of texture, drone and rhythm. This set has evolved from the recent Music By The Metre project, recordings from which are due to be released through Entr’acte later this year, mastered by Lawrence English.
http://grahamdunning.com
https://soundcloud.com/grahamdunning/

Hexachordal is musician and artist Tom Milsom. He is based in London, self-producing his albums and distributing them online. His style spans various genres, from psychedelic pop to hypnotic electronica. He also improvises live, looped beats from percussion, synth and vocals, where sounds grow organically and degrade through repetition.
http://hexachordal.bandcamp.com/
http://tommilsom.bandcamp.com/

Phillip Henderson has a body – while he is out of it he plays drones, drum kit and electronics – he also chants and sings. He is a researcher at The University for the Creative Arts in south-east England. His research interests include the temporal relationships between drone, improvisation and indeterminacy and the improvisational techniques of Derek Bailey, Cornelius Cardew, Ornette Coleman, Charlemagne Palestine and John Zorn.
http://www.last.fm/music/Phillip+Henderson/+albums