On Saturday 28th February I’ll play turntables and mudlarked objects in a duo with Brigitte Hart, as part of BRAK Fest, at Hundred Years Gallery in London. Full details below.

BRÅK Festival of Improvised Music : A full day festival of improvised music at Hundred Years Gallery, from the musicians behind the BRÅK concert series.

The festival is split into two sessions, afternoon and evening.

Each tape copy has a bit of broken mirror attached, with screenprinted cover from a 1960s typeset.

By using live coding, it’s not the precariousness of hardware, but rather that of software which is exposed. Live coding is, at the core, a different approach to art, and especially to music: in times where music software becomes more and more complex and layered, making it impossibly hard to control the low-level means of music production, live coders take the opposite stance, by performing exclusively live code manipulations and by exposing via visual projection the code being written or modified. As it is clear to anyone who’s ever had any experience of it, coding, as an act of communication with a computer, is an incredibly frail matter – a single misplaced letter or symbol leads to the complete inability to perform the desired action. And in music performance this risk is heavily amplified: a miscommunication between a live coder and his computer will extend to the whole audience, breaking the spell – or in the case of algoraves, the party.

In Reach Into Time, a collection of live coding performances, Graham’s music is quite close to the rave tradition. It’s not completely danceable, but it is certainly beat-driven, as songs like Reachin and Springback prove. It sits in a peculiar sonic area between early Detroit techno (Rough) and Photek’s drum ‘n bass (Kru Love), held together by a good dose of grit and rawness, which are the signature features of live coding raves, where sound processing inevitably has to be used with restraint, as it entails more lines of codes to be written or modified. And yet, this is precisely the charm of this music. It’s the offspring of a unique kind of interaction, the product of a verbal (and verbose) communication between an artist and a computer. Some will hear in it a proof of the closeness of machines and humans; others will find in it yet another demonstration of the distance of human and artificial intelligences. But the acts of communication captured by these recordings remain – and they sound like two old friends making music together.

Another show playing turntable and objects as part of the ensemble hymn, this time as an improvising trio with Chris Dowding (trumpet and electronics) and David Ross (electronics).

You can hear extracts from a previous show here. Full details below.

Trumpet and electronics duo WOOLFENDEN mine the space between the experimental and the melodic. They keep as much as possible to a minimum, be it kit or concept, believing simplicity is key. Drawing from the microtonal flutters of Giacinto Scelsi, the drones of Eliane Radigue, and the melodic directness of Miles Davis, they want to make music both pastoral and industrial, futuristic and ancient.

Formed in London in 2018 WOOLFENDEN have performed at Testbed1, The Betsey Trotwood and The Agency Gallery. Sarah Woolfenden is a musician (primarily trumpet and voice) and visual artist. She is the trumpeter and vocalist of Tolerance Manoeuvre, a band which takes the ‘score-based’ songwriting of Mogwai or Sigur Ros but with a jazzier and folkier start point. Justin Harries will perform on analogue monophonic synthesiser and saucepan.

They also play with guests and in improvised configurations, and this gig is part of a tour with vinyl improviser Graham Dunning. hymn have performed previously at The Vortex Jazz Club, Ashburton Arts Centre and various venues around Norfolk.

Albertine are a Norwich based collective performing improvised music. The group create soundscapes which range from cacophony to moments of fragile beauty.

On Saturday 8th February I’ll play turntable and objects in a trio with Benedict Taylor (viola) and Daniel Thompson (guitar) at the New Wave of Jazz Festival at Hundred Years Gallery in London. Full information below.

Belgium’s A New Wave of Jazz label – curated by Dirk Serries – has always connected with the current free improvisers from the UK. The label catalogue output proves it. Their style of interacting and creating is so uniquely in tune with Dirk’s vision and what the label stands for. This, and his fondness for Hundred Years Gallery has motivated him to organise his 2nd label festival in the heart of London’s free improvised music scene.

The festival is a 2-night event on Friday February 7th and Saturday February 8th 2020.
The two nights have their own musical character; Friday evening consists of only duo performances while Saturday night is reserved for trio combinations.

On Friday 7th February I’ll play an improvised live code set on Threads radio — tune in for sample based techno, house and weirdness from 11am.

The set comes just before the launch of a new tape on SØVN Records next week: Reach Into Time is a set of edits from live code live sets, live streams and studio jams. Check out a track from the album here:

Out now on Kate Carr’s excellent Flaming Pines label, a new tape and download of three altered field recordings. Visit the label page here to preview or buy a copy.

Something About Still Trying is based around a mobile phone recording taken on a coach to London from Sheffield, which was waiting to start the journey in the terminal. There are two repetitive beeping noises happening in the coach, like a prosaic loop or a skipping record, which I augmented digitally to make the piece.

A Tracing of a Single Tide was recorded at Walton on the Naze, North Essex, when I spent the day collecting audio, photos and objects with Sally Child as part of her Groyne Gallery project. I used a stick and some rope I found on the beach to make a large stylus, amplified with contact mics, which I recorded dragging along the high-water mark on the beach. I also recorded some reed organ and the water lapping at the end of the pier. These sounds were put on tape then combined with some synth in a live take to create the recording.

Windchange is a recording taken inside the top of a 100 year old windmill in Harplinge, Sweden, during a rainstorm and a change in the wind direction. The windmill, which has been adapted into an artspace by Mikael and Julie Ericsson, still works to tell the wind direction as it mechanically tracks the wind, turning its large sails towards it. I enhanced the recording to try to approximate the feeling of being inside the strange, creaky dome as it turned. 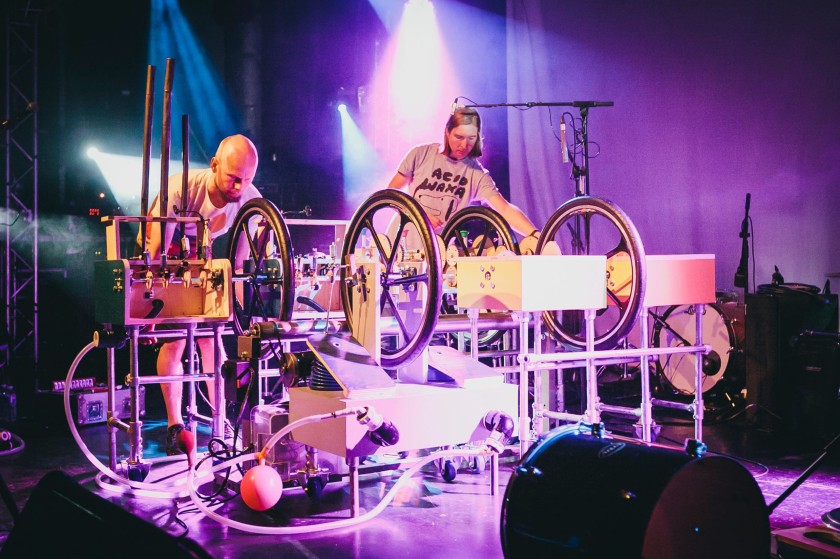 On Friday 31st Janaury me and Sam Underwood will take the Mammoth Beat Organ to Coventry for a live set for Ideas of Noise. Full information below. Tickets and other event dates on the festival website.

SOUND OBJECT SEEING
A festival-within-a-festival where music and art collide. Where the visual plays a fundamental part of the process and performance. Audiences are taken on a journey where the experience of listening and watching constantly shifts and is re-appraised.

Andrew Spackman curates a feast of audio-visual delights including:

WASTE PAPER OPERA COMPANY
Interdisciplinary theatre collective Waste Paper Opera premiere their new work Syrup Tracing: or, on the significance of rising and/or falling, inspired by Cyrano de Bergerac’s Voyage to the Moon (1657), one of the earliest science fiction novels ever written.