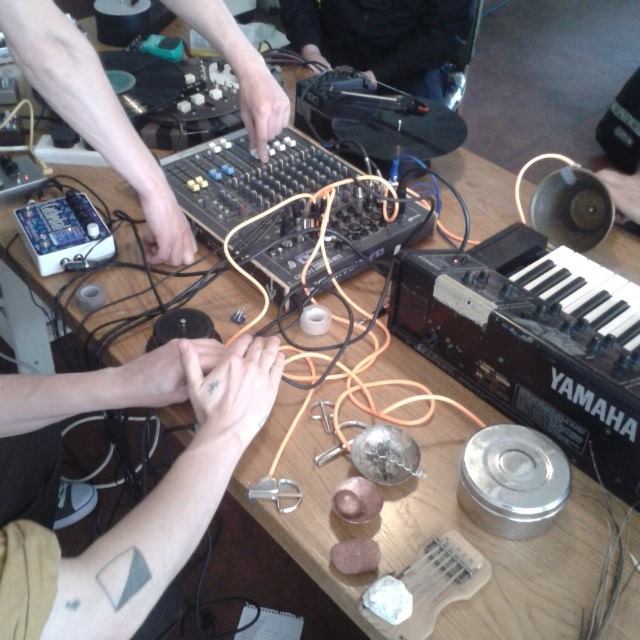 Concepts of eternity and immortality will disintegrate, and the woes of eternalization of matter will be reduced ever more to nothing …the stripteases of the constellations, the rhythmic dances of asteroids and ultrasonic music of thousands of fragmented sounds will supply us with moments worthy of demigods.

During the late 50s and 60s, founding member of the Sitationist International, Giuseppe “Pinot” Gallizio – an engineer, botanist, chemist and artist – developed a technique known as Industrial Painting. In a collaborative effort – a critical perversion of the assembly line – artists, scientists and local people used primitive machines to fill long rolls of canvas with abstract-gestural paintings. These mass-produced but unique objects were intended to be sold en masse, cut up by-the-metre, to usurp the art market.

Through an ongoing project, sound artist Graham Dunning explores Gallizio’s work by analogising the visual and auditory realms. This radio programme documents the latest stage in the process: The Radiophonic Laboratory of Antimatter. Here Dunning invites participants to a workshop at his London studio, the aim, to create abstract-gestural audio by transposing Gallizio’s original techniques into sonic equivalents.

Today man is a part of the machine he has created and which negates him and by which he is dominated. We must invert this non-sense or there will be no more creation; we must dominate the machine, force it to make the unique gesture — useless, anti-economic, artistic — in order to create a new anti-economic society, one that is poetic, magical, artistic.

After lengthy discussions on how the process might possibly be achieved, the group builds a sound-making machine from record players, tone generators, elastic bands, kitchen implements and musical instruments. Working within and pushing against parameters set out in the preliminary discussion, the operators release the ghost in the machine. A collaborative exorcism: mixing desk as ouija board.

On Wednesday 23rd July 2014, Dutch radio station Concertzender broadcast the programme which was curated by SoundFjord as part of Martijn Comes’ Inventions for Radio.